Good morning all! Today we want to mix things up a bit with some totally random, yet amazing, horse facts to expand your equestrian knowledge. (Because, why not??) Some of these you might know and some might surprise you! Today we start part 1 so take a look below and enjoy :)

And don't forget that we welcome horses of all breeds, ages and disciplines at Southwind! Learn more about our stall boarding available at:  www.southwindfarminc.com!

1. Horses have the largest eyes of any land mammal. (Source: HorseswithAmie)

2. Horses can run within hours after birth. (Source: ScienceKids)

3. When horses look like they’re laughing, they’re actually engaging in a special nose-enhancing technique known as “flehmen,” to determine whether a smell is good or bad. (Source: Wikipedia)

4. At one time people thought horses were colorblind. They’re not, though they are better at seeing yellows and greens than purples and violets. (Source: The Horse)

5. A horse's teeth take up a larger amount of space in their head than their brain. (Source: LiveScience)

6. You can generally tell the difference between male and female horses by their number of teeth: males have 40 while females have 36 (but honestly, most us are going to use the much “easier” way).

7. Horse hooves are made from the same protein that comprises human hair and fingernails. (Source:  Ker.com)

8. The horse trailer (“horse box”) was invented by Lord George Bentinck, a U.K. man who needed a more effective transport for getting his six horses from one racetrack to another.

9. In 1872, Leland Stanford (1824-1893) made a bet that at some point in the gallop all four of a horse’s legs are off the ground at the same time. Eadweard Muybridge (1830-1904) proved him right by using a series of 24 cameras and photographing a racehorse named Sallie Gardner. (Source:  HorseswithAmie)

10. Horses are more secure and comfortable when trailering if they can face the rear, but they prefer openings. (Source:  Animal People News) 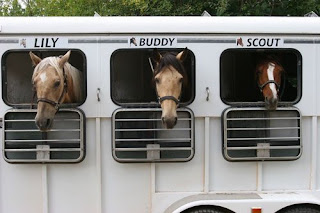 11. Horses can sleep both lying down and standing up. (Source: ScienceKids)

14. Because horse’s eyes are on the side of their head they are capable of seeing nearly 360 degrees at one time. (Source: ScienceKids)

16. The Przewalski’s horse is the only truly wild horse species still in existence. The only wild population is in Mongolia. There are however numerous populations across the world of feral horses e.g. mustangs in North America. (Source: Onekind)

17. Horses use their ears, eyes and nostrils to express their mood. They also communicate their feelings through facial expressions. (Source: CBS News)

18. Horses will not lie down simultaneously because at least one will act as a look-out to alert its companions of potential dangers. (Source: EquiSearch)

19. Vocalizations are highly important to horses. Examples: Whinnying and neighing sounds are elicited when horses meet or leave each other. Stallions (adult male horses) perform loud roars as mating calls, and all horses will use snorts to alert others of potential danger. (Source: Onekind)

How many of those did you already know and what was new? Happy Riding everyone!
Posted by Southwind Farm: Horse Boarding in Montgomery County MD at 6:00 AM